heptonstall chapel
In continuous use for more than 250 YEARS

Firstly is its size. Much bigger than the chapel, it was built with supreme Victorian confidence to hold some hundreds of scholars in the main hall, with a large lecture room, kitchens and meeting rooms downstairs. It was intended both to offer basic education to children as well as a higher education with lecture programmes for adults. It was also a valued social centre for shows and pantomimes. Unlike the pubs, this was a welcoming, safe centre for respectable working class women.

But the building of the Heptonstall School meant it may have been underused quite quickly. The Sunday School was built with one door facing the chapel and another at the lower level facing Tinker Bank Lane,  a direct route up from Hebden Bridge.

But not long after this door was blocked up, creating a tiny “study” with a window in what was a porch, with a writing desk built in to it. Meanwhile, a high wall was built on the North side, surrounding the kitchen door. Were these changes made due to security concerns about a building that was already empty more often than expected? 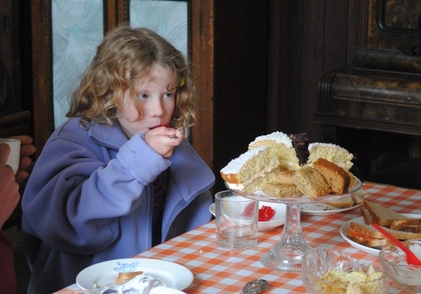 Apart from this, the building is virtually unchanged. Victorian forms, with backs that flip so they can face either way, are four deep around the main hall. A small room off the main hall, possibly a head teacher’s room with one of only three fireplaces, still has its huge glass window that means the whole hall is under his eye. The original doors are still in place, the built-in wooden settles still line the walls in the meeting room and servery. Huge dressers are stuffed with stamped china and dozens of glass cake stands.

The building is still in use as a Sunday School to the small congregation. Annual Christmas bazaars and Whit Walks followed by Methodist teas are well attended. Drawers open to reveal felt-tip pens and colouring sheets now have a place alongside century-old journals and Bibles.